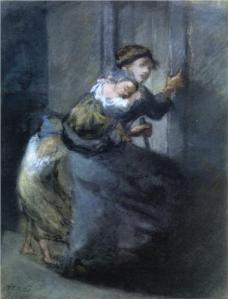 “Mother with Two Infants”
by Jean-Francois Millet, circa 1800’s

The term “babywearing” is obviously a modern word. Maggie would not have used that word. Nor would her daughters (my grandmother), nor would her grand-daughter (my mother). So, even though the word is new, the practice is old. Every society has some form of carrying or holding their babies, most often in a piece of cloth, which frees the mother to do necessary tasks.

In Mexico they use a Rebozo which is actually a piece of cloth that is also worn as a garment. Alaska and Canada traditionally use an Amauti which is a special coat where the baby traditionally rides on the back and is protected from the elements. Mothers in the Orient typically use Mei Dai style carriers which have shoulder and waist straps. In New Guinea they use a type of bag that the mother wears across the forhead. African mothers most often use a short piece of cloth and wear their babies low on their back. American Indian and Aboriginal mothers use cradleboard style carriers for their babies. In Europe mothers have used a variety of cloth carrier styles, including shawls worn by mothers in Wales.

I have often wondered what Maggie did with her babies while she was cooking, cleaning, washing. My grandmother was the youngest of the six girls, so I imagine that by the time she was born that Maggie just passed her off to one of the older sisters. But, what about when the older girls were all little?

I’ve tried to find evidence of American babywearing in colonial and antebellum eras. I believe that it was practiced even though there is not much proof of it. In most cultures wearing your baby comes from necessity, and the paintings and written documentation from these eras do not focus on the lower classes where babywearing would have been necessary. I’ve accumulated a few photos of babywearing paintings, photos and artwork which you can view on my Pinterest page. And if you really to see a wonderful collection of babywearing photos from around the world visit Hybrid Rasta Mama. She has the best photo collection I’ve ever seen.  I believe that the traditions of babywearing throughout the world must have been continued by some of our ancestors in the early days of American. It’s even mentioned by contemporary authors.

“Some [Indian mothers] had narrow bundles tied on their backs, and tiny babies’ heads stuck out of the top of the bundles. And some babies and some small children rode in baskets hanging at the ponies’ sides, beside their mothers. More and more ponies passed, and more children, and more babies on their mothers’ backs, and more babies on the ponies’ sides. Then came a mother riding, with a baby in a basket on each side of her pony. Laura looked straight into the bright eyes of the little baby nearer her. Only it’s small head showed above the basket’s rim.” (Little House on the Prairie by Laura Ingalls Wilder, First Harper Trophy edition, 1971, pgs. 306-308.)

I wish now that I could ask my grandmother’s sisters what they did back then. Maggie’s grandmother was American-Indian and I think there was some Scotch or Welsh somewhere back there too so maybe something was passed down. Who knows? I may never know whether Maggie wore her babies, but I certainly wear mine.

Babywearing has been one of my most used skills as a parent. It has been refined and grown since I began with my oldest in a ring sling so that she would take naps. In the city, babywearing is our mode of transportation. We go places in our wraps.

Rachel Parks is a CBWS Babywearing Consultant. She has 7+ years teaching experience, and 13+ years experience wearing her own children. She is experienced with all carrier types, as well as wearing newborns, tandem wearing, and wearing children with disabilities and special needs. She is a founding leader of Wear Together NYC (formerly Queens Babywearing and BWI of NYC). Rachel offers individual consultations and group classes.

To schedule a consultation or group class fill out the form below or email her at rememberingmaggielane@gmail.com.

Making this Mexican Skillet for dinner tonight. You can find it on the blog in the “Family Favorites” page. It’s one of the first recipes I put up and still one of my quickest and easiest dinners.
One massive sourdough boule coming up! Honey white wheat sourdough.
Watch for a homemade Trader Joe’s Lemon Pepper recipe in my blog soon.
It still amazed me that this slurry of flour and water is alive. It will rise and bubble, and make good, healthy bread. Making gluten free loaves today.
Loading Comments...
%d bloggers like this: