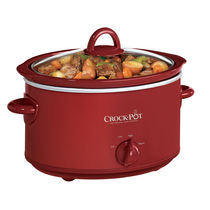 The convenience of crock pots for me is that it’s a one-pot dish. You throw it all in to cook in the morning and by dinnertime (when everyone is melting down and you’re exhausted) dinner is ready.

However, this means that I have a hard time finding crock pot recipes that I will actually make. Most recipes that I come across require cooking the meat beforehand. Frankly, I’ve never understood that. If I wanted to cook the meat in the skillet, then I would cook the meat in the skillet and not cook it first so that then it could cook in the crock pot all day. So, if it requires cooking meat or sauteing beforehand then it’s pretty likely that it’s not going to make it to my dinner table. I do have a few recipes that I’ve used and liked (click here and scroll down to see a recommendation for my favorite little crock pot book). But, most of the time I end up modifying a recipe that I’ve used before or just making one up as I go along  based on what I have on hand.

So, here are some tips on coming up with your own crock pot meals.